This week we take a look at the top suburbs for singles, as well as take a closer look to see whether we are currently seeing a house price slowdown

Today is Singles’ Day! For those unfamiliar with it, the day started in China as a day to celebrate people who are not in relationships. Singles’ Day always falls on November 11 because the date 11/11 represents four ones, or four singles, standing together.

As well as more people living alone, we are also seeing more people buying homes on their own.  Data from Loan Market has shown that since the start of the pandemic, the number of singles settling on home loans has increased by 76 per cent, although the rate of growth has slowed over the past six months likely because of the rate of price growth.  Singles currently account for around half of all home loan settlements.

To celebrate Singles Day, this week we are taking a look at the top suburbs for singles.

To determine the best suburbs, we looked at suburbs with median house and unit prices under $750,000. For Sydney, we have increased this to $1 million medians given how expensive that city is.

We then looked at suburbs which have a higher proportion of single households. Broadly, these suburbs tend to be better suited to single people than families. This could be because they have more fun things to do like nightlife and restaurants compared to family suburbs. The type of housing also tends to be suitable for a single person. It is more unusual for a single person to want to live in a five bedroom house on a large block for example and as a result suburbs with a lot of this type of housing generally don’t contain a lot of singles, but do contain a lot of families.

Using these parameters, we then ranked by price growth to pick the top suburbs for each capital city or region.

The city which is most friendly for singles is Adelaide which has the most options. There are 130 suburbs where house prices are under $750,000 and have seen price growth. This is followed by Perth with 55 suburbs.

At a city level, the options are generally to buy further out and get a house. Or alternatively buy closer in and get an apartment. Some really great apartment options include beachside Glenelg in Adelaide with a median of $683,000 and in Melbourne, Caulfield East has a similar median and is in a great part of inner Melbourne. Houses are harder to come by but Kincumber on the Central Coast in Sydney has a median house price under $1 million and is close to the beach. Hobart has some very affordable options. Primrose Sands is right on the beach and is under $380,000.

Over the past three months, Australian median house prices have risen 3.8 per cent. This compares to the three months prior when they increased by 2.3 per cent. House price growth continues to accelerate. Why then are we starting to see greater discussion that the market is slowing? While on aggregate we are seeing increases, there are some cities where we are starting to see a slow down.

The two cities where this is most apparent are Perth and Darwin. Perth’s housing market is highly sensitive to iron ore pricing. Iron ore prices have fallen significantly since June and house prices have closely tracked this. Darwin is still seeing price growth but the rate of growth is slowing. In Sydney, we are still seeing eye watering growth of 6.7% over just three months but it is slightly slower than the previous three months when the median increased by 8.1 per cent.

At present, three cities have started to show a slow down in growth. In comparison, five cities are continuing to see accelerating growth. The most extreme are Canberra and Hobart where house price growth was double digit over a three month time period, and significantly higher than what we saw in the previous three months.

While we are yet to see definitive signs of a slowdown across Australia, it is highly unlikely that prices will continue at their 2021 pace next year. The main reason is that we are starting to see finance restrictions put in place, the first of which came in on November 1. If housing finance doesn’t continue to slow next year, then we can expect additional restrictions to be put in place. An even greater impact however will be an earlier than expected interest rate rise which at this point, is still looking unlikely in 2022. As we are now seeing in New Zealand, a combination of interest rate rises and heavy finance restrictions is a sure fire way to stop price growth. 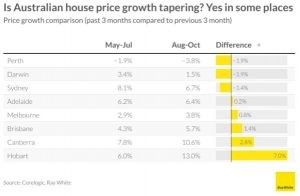