UPDATE: NO hospitalisations have occurred after a freak three-car pile up just east of the Myrtle Creek Bridge.

Sergeant Mark Flynn of the Proserpine Police was at the scene and said an empty car had rolled down a driveway onto Shute Harbour Road.

Sgt Flynn said the vehicle travelling west was able to drive off and wasn’t damaged severely.

The unaccompanied vehicle came to rest on its side and was removed from the road by an excavator sourced from a nearby property.

EARLIER:  Emergency crews are currently on the scene of a three-vehicle crash on Shute Harbour Rd at Myrtle Creek.

A four-wheel-drive vehicle is on its side in the middle of the road, with two other vehicles off the road.

It is unknown at this stage if any of the drivers or occupants of the vehicles are injured. 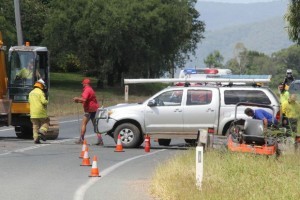