Our most wanted city (and suburbs)

There really has been no suburb or city untouched by COVID accelerated demand. In determining Australia’s most wanted city and suburbs so far this year, we have looked at both price growth and rental growth. So where are the areas that both buyers and renters want to be?

At a capital city level, Canberra has clearly come out as the most wanted. Median prices and rents in the city have increased by in excess of 10%. There were other parts of the country that exceeded Canberra for rental growth, in particular Darwin. But although Darwin saw a surge in rents, house prices haven’t moved anywhere near as much.

Why has Canberra been the top performer? It comes down to Government employment, creating jobs growth. More people now need to be in Canberra for work, creating a surge in rents. Population growth and greater optimism in the territory is also driving prices.

While Canberra tops the list at a capital city level, the suburbs that are the most wanted at the moment are in the majority still in regional areas. Although growth in capital cities is now overtaking regional growth at an aggregate level, we can see from this analysis that many regional towns are outperforming even the most desirable capital city suburbs. The Sydney and Melbourne suburbs making the list are all in outer suburban locations. House prices may be moving quickly in inner areas of capital cities now but rents are yet to catch up. Queensland tops the list for population growth (no surprises!)

More people left Australia than arrived in the 12 months to March 2021, according to ABS data released today. But despite losing 95,300 people to overseas, Australia’s population increased marginally by 0.1%, driven by natural increase.

At the other end of the scale, Victoria lost 42,900 people. The biggest component of the decline was 42,900 people moving overseas. The state also lost 18,200 people to other parts of the country.

What does this mean for property? House prices are moving quickly everywhere however Queensland is also being boosted by strong population growth. 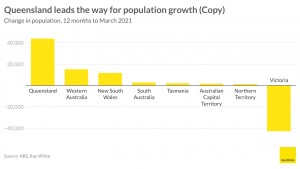