There was some close shaves and barging at the start of the 2017 Airlie Beach Race week this afternoon but all 100 yachts got away to a clean start in the Double Cones opening race.

Marketing director of the event, Adrian Bram, said it was it was not as exciting as last year but was grateful for the “great weather” and a successful start.

Mr Bram said the Double Cones race was a favourite with the sailors.

From the start line in Pioneer Bay the fleet makes it’s way to the windward mark and then around Double Cone Island and back to the Whitsunday Sailing Club.

Light airs of about five knots from the east propelled the fleet made up of nine divisions.

From trailable yachts and IRC racers to maxis and mulithulls. The start is the most difficult part of the race, Mr Bram said.

“There is all sorts of challenges they will encounter on the way through but the start is when everyone is bunched up together and everyone wants to get that position,” he said.

“If you can get at the front at the start you may well be able to hold that all the way.”

“There was not a roll of gaffer tape left in Airlie Beach with people trying to patch their boats up in time for the start,” he said.

The weather for the up coming six days of racing is looking “pretty drifty,” Mr Bram said. “We are expecting light airs in the 10-15 knot range. And on the last day there may be a north easterly of about 20 knots which could make it very interesting,” he said.

At last years race week the fleet was hammered by ferocious winds resulting in two yachts going to the bottom and a dis-masting.

Media director of the regatta, Di Pearson, was on the start boat on Pioneer Bay and saw all nine divisions get under way.

“The starts were great, because it’s light everyone was well behaved,” she said. 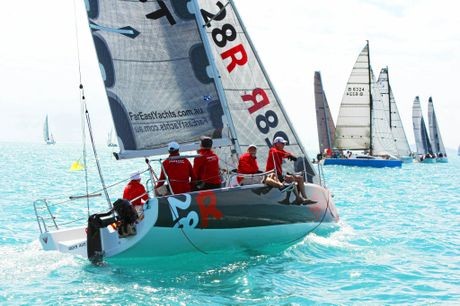 “So you don’t see all those crashes that you would get with a breezy start.”

The light airs were ideal on the first day to ease sailors into the regatta.

“It will be a difficult race because it is light. The navigators and the tacticians are going to have their work cut out for them today,” Ms Pearson said.