A rush of entries over just a few days has seen the fleet for Hamilton Island Race Week 2018 surge past 200 and towards record territory.

The number of entries now exceeds last year’s fleet of 202, which was the second-largest in the 35-year history of the great regatta. And, with entries open for another three weeks, it is possible the final fleet for this year will go close to the record 252 set two years ago.

“The number of entries at this stage, and impressive quality of the fleet speaks volumes for the appeal of Hamilton Island Race Week,” said Hamilton Island’s CEO, Olympic and world champion yachtsman, Glenn Bourke. “It’s a tribute to the team of organisers who work all year to ensure the series remains a world-class event. Our challenge is to deliver the best racing you can have under sail, and the best social agenda imaginable. You only need to look at the quality of the fleet this year and the fact that the event will bring more than 2000 sailors, their families and friends to the Hamilton Island, to realise it is a formula that works.” 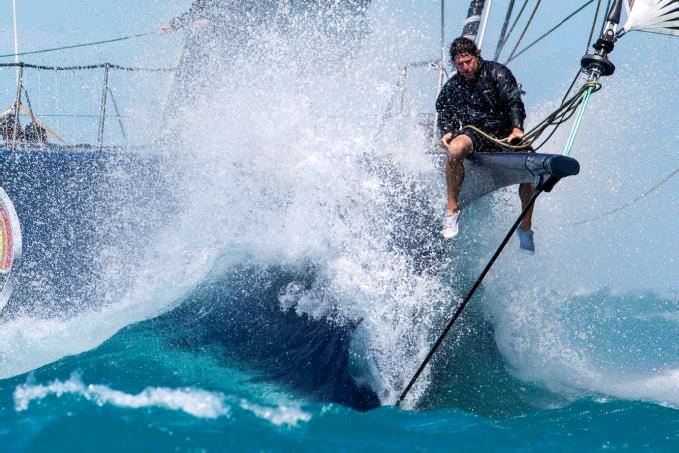 A look at the cross-section of yachts that entered at the time the fleet went into the 200s reflects the diversity of designs that will compete across the 15 divisions at Race Week this year. Similarly, the home clubs of the yachts are located across Australia and overseas, a fact that confirms the widespread appeal of the regatta.

When it comes to the tall and the small in a fleet, the largest entries are the 30 metrelong supermaxis, Black Jack (Peter Harburg, Qld) and Wild Oats XI (the Oatley family, NSW), while the smallest is the 6.6 m long trailable yacht, Rhumbmaid, owned by Hamilton Island local, Stu Green. Interestingly, Stu’s day job sees him at the other extreme in sailing. He is the skipper of the island’s 20-metre long, high-performance catamaran, On-The-Edge, which takes tourists on exhilarating day-sailing expeditions around the Whitsunday islands.

Race Week’s acclaimed Race Director, Denis Thompson, said he expected a surge of entries to come in the next three weeks: “It is already an impressive fleet for Race Week this year, and I think there are still plenty of entries to come,” he said. “Past experiences certainly confirm we get a last-minute rush. At the same time, quite a few sailors decide about now that they want to be with us, so they charter one of the many yachts that are available in the Whitsundays, just so they can be part of the action.”

All information relating to the regatta is on the website:
www.hamiltonislandraceweek.com.au SILVER SEAS: Some of the fleet at Hamilton Island Race Week 2017 sail towards the finish
line in the late afternoon (Credit: Andrea Francolini)

GETTING A LIFT: The Tag 60 catamaran, Stardust, owned by Ian Condor Smith, will be
returning to the Whitsundays for Hamilton Island Race Week 2018.