Waking up with Hamilton and South Molle islands in front of you, and 50 years of busy city life behind you, is an idyllic way to start the day for Sue and Joe Perakovic.

The couple, who moved to Ayr from Canberra two years ago, last year bought a dream holiday home 10 minutes from Airlie Beach when they purchased 7Shutehaven Close, Shute Harbour.

“When we looked at the house, we walked out on to the upstairs balcony and just loved the views, the peace, and the serenity, as well as looking at the islands and watching the ferries go past,” Mrs Perakovic said.

“I could sit out there all day.

“That is my favourite spot. Or lying in bed, because from there I have the same views. I don’t draw the blinds so that view is the first thing I see in the morning.

“If I stand up, I can see Hamilton Island and, in front of us, is South Molle island.”

Mrs Perakovic said the couple’s first trip to the iconic Whitsundays last year was a house hunting mission, and they fell in love with the region instantly. They now live in Ayr and look forward to holidays in their new house. 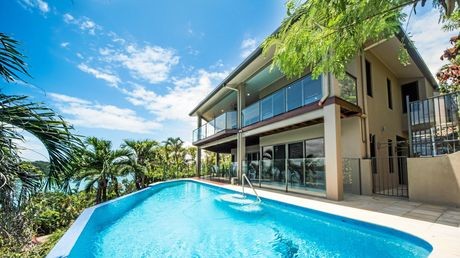 The couple, who have three adult children and two grandchildren, said North Queensland’s “sunshine and heat all year round was too good to resist”.

“It’s such a relaxed feeling. It feels like you’re in holiday mode non-stop. Everything is causal and relaxed and very friendly, especially coming from the city where everything is rushed.

“We’ve bought a jet ski so we jet ski around the islands which is fun.”

Mrs Perakovic said the modern five-bedroom house, which sold for $1,035,000 through Ray White Whitsunday, had been damaged during Cyclone Debbie last March – the same time as the couple were finalising the contract on the sale of the property.

“The whole house had to be gutted because water got in under the roof, and came in through the roof. And all the floorboards had to be redone.

“The previous owners were there taking out their personal possessions when the cyclone hit.”

She said the inside of the home was completely repaired and restored during last year and the couple had their first sleep in their new home in September.

“It was so beautiful inside so I didn’t change a thing!”

The house – with three bathrooms and two living areas – has a neutral colour scheme.

“Also, in the middle of the house, there is a concrete store room where the previous owners huddled for eight hours when Cyclone Debbie came through,” Mrs Perakovic said.

Ray White currently has the house available for holiday let. Bookings can be made by calling 07 4948 8500.