Celebrating The Heart Of The Reef

Airlie comes alive in August to the sights and sounds of the biggest party on the Whitsunday event calender.

It will be a reduced program this year thanks to Cyclone Debbie but there will still be an incredible diversity of events guaranteed to please families with young children to single travellers and everyone in between.

The festival, now in its 17th year, is themed Heart of the Reef, as it celebrates what it means to live in the Whitsundays, on the edge of the Coral Sea and in the middle of the Great Barrier Reef.

The festival is full of classic events such as Telstra Family Fun Day, Revvin’ the Reef Car Show, Fireworks on the Foreshore and the beach music stage will be Rockin the Reef throughout the weekend.

New event this year is the Mantra Magic Mile Run which will be run on Airlie’s main street between the two roundabouts. 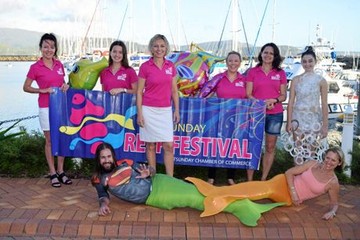 One of the most popular events of the festival is the Rotary Street Parade.

Spectators flock to the newly-revitalised main street to watch the amazing floats, built by businesses, community and school groups, pass by.

Cafes, bars and restaurants overflow as locals and visitors alike enjoy the Whitsunday hospitality and show their support for those in the parade.

The younger kids are the focus on Sunday, with the Telstra Family Fun Day.

Circus performers, face painting and traditional games, such as three-legged and sack races, are run alongside modern activities like a selfie competition and slushy slurping comps, with some awesome prizes up for grabs.

There are many other events and activities during the four-day program, including comedy night, the pop-up sunset bar, carnival rides and market stalls.

Just announced are the popular electro act, the Potbelleez, who will return to the Whitsundays and perform on the beach stage on Saturday night with 8 Ball Aitken.

King Social will headline a stellar bill of DJs on Friday and the lads will also launch their new album called In Colour.

More great entertainment in the form of the Rotary Flickerfest will be sure to draw crowds to the Airlie Beach foreshore on Sunday.