Carnival For Cody Is A Big Success

Community support poured in for Jubilee Pocket boy Cody Gibbs as more than $23,000 was raised at a carnival held in his honour on December 16.

Cody, 11, was diagnosed with cancer of the pineal gland in October and is in his third week of radiation treatment at Brisbane’s Lady Cilento Hospital.

Friends and community members jumped at the opportunity to support Cody’s family, who have lived in the area for more than 20 years, at Cody’s Carnival, held at Jubilee Tavern last weekend.

Local hairdressers volunteered their expertise to braid, shave and colour hair throughout the event.

Cannonvale State School physical education teacher Steve Westley took one for the team, being repeatedly soaked in water on a dunk chair.

Even Santa made an appearance, arriving with the Airlie Beach auxiliary firefighting crew.

Cody’s grandfather Graeme Davis, who attended the event, said he was touched and grateful for the support shown to Cody and his family.

“The town’s been to hell and back and then its resilience shows through when you see the community turn up to events like Cody’s Carnival,” Mr Davis said.

“I take my hat off to all those people who arranged it all.” 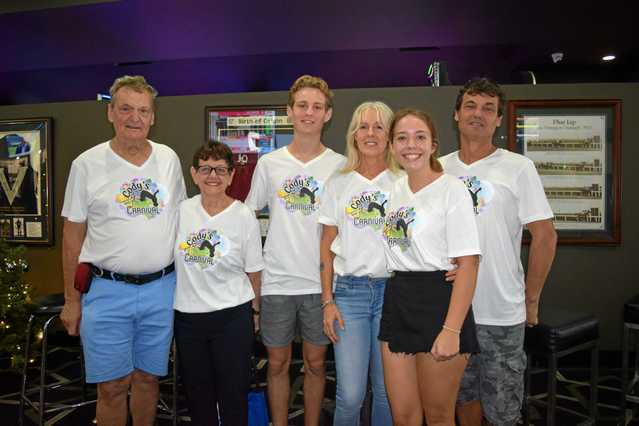 Cody’s parents Donna Davis and Dwayne Gibbs left their homes and jobs and relocated to Brisbane in October, where they have been staying at Ronald McDonald House while Cody undergoes radiation treatment.

Donna Davis said she wanted to thank everyone who went from the bottom of her heart.

“You’re so far away, but to have so many people behind you is amazing. We appreciate it so much.” she said.

“The support from strangers has been insane.”

Ms Davis said Cody was back in hospital, suffering from stomach pain during radiation treatment since a shunt was inserted in his brain about three weeks ago.

While there is uncertainty as to the cause, doctors have ruled out “all the bad things”, she said.

Despite obstacles in his way, Ms Davis said Cody was handling his treatment “incredibly”.

“(Cody) never gets upset over anything. He just takes what he gets every day,” she said.

“The nurses love him. He’s a perfect patient. If they need to stick a needle in his arm, he just says ‘which one?’.”

Donations to help support Cody and his family can be made on the Cody Gibbs GoFundMe page set up by family friend Kell Bruce in November.