A First-timer’s Guide To The Whitsunday Islands

The Whitsundays region is one of Queensland’s most popular holiday hot spots — with good reason.

With 72 islands to explore along with a handful of beachside towns on the mainland, the Whitsundays have something for everyone. Skyscanner Australia has the inside information for first-time visitors on the best places to go, and what to see in the Whitsundays.

BEST TIME TO VISIT THE WHITSUNDAYS
On a similar latitude to Fiji and cooled by southeast trade winds for much of the year, the best time to visit the Whitsunday Islands is usually between April and November. But if you’re looking for a holiday bargain or want to avoid the crowds over the busy season, February is your best bet.

WHERE TO GO IN THE WHITSUNDAYS
The choices for exploring the Whitsundays can seem overwhelming — there’s so many things to do. You could paddle your way around Hamilton Island in a sea kayak. On Whitsunday Island there’s a cave containing Aboriginal art at the end of a short walking track. Or, if you visit Nara Inlet after it’s been raining, you could cool off beneath a waterfall.

No Whitsundays visit would be complete without a day trip to famous Whitehaven Beach. Or the outer Great Barrier Reef for that matter. Snorkelling, diving and swimming are the main reason for visiting one of the choice spots like Blue Pearl Bay, Butterfly Bay or Hardy Reef. But if coral and marine life aren’t your thing there’s walking trails on most island to stretch your legs on. What about skippering a bareboat yacht through Whitsunday Passage just as Captain James Cook did back in 1770 when he named Whitsunday Passage? If that sounds too hard you could find a spot on the deck of a crewed yacht and sip champagne while the islands, (and the humpback whales if you’re there between July and September) slip past.

ISLAND RESORTS OF THE WHITSUNDAYS
Hamilton Island is the “Big Kahuna” when it comes to island resort accommodation options. The most developed island in the Whitsundays, the choices range from simple garden bungalows at the low end of the price scale to exclusive luxury of Qualia at the other end. The view is pretty perfect from every direction on Hamilton Island. Picture: iStockSource:Supplied

There’s plenty in the middle too, whether you stay in a hotel room, a private villa or rent a house large enough to accommodate a family group. While we’re talking luxury, Hayman Island is home to uber luxurious One&Only Hayman Island Resort and has been a favoured honeymooners escape for eons. A few years back they started welcoming families and now have fabulous facilities like a family-friendly pool and poolside/beachfront restaurant to suit this crowd.

Daydream Island is a tiny slip of an island that’s taken up entirely with the always popular Daydream Island Resort. Closed at the time of writing for refurbishment after tropical cyclone Debbie tore through, Daydream is sure to bounce back looking better than ever.

Palm Bay Resort on Long Island sits on arguably the Whitsundays prettiest beach (Whitehaven Beach aside, which is on Whitsunday Island and has no accommodation options beyond camping). Gable-roofed bures are shaded by coconut palms a few steps from a crescent-shaped beach that merges into a lagoon protected by fringing reef. It’s the sort of scene postcard photographers dream of. 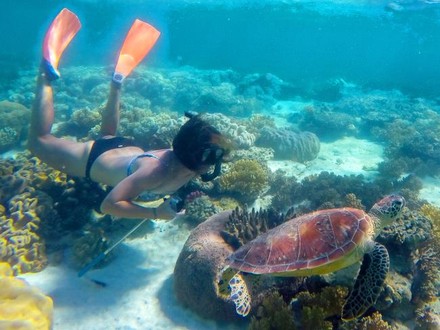 It’s one of the world’s most rewarding spots for divers.Source:News Corp Australia

GETTING AROUND THE WHITSUNDAYS
Boats are the obvious choice for exploring the Whitsundays and visitors are spoiled for choice here. From sea kayaks and jet skis, to maxi racing yachts or island-hopping ferries, liveaboard dive boats and traditional ships powered by billowing sails, there’s a boat trip to err, float your boat. You could also fly around the Whitsunday Island too. Scenic flights by helicopter, sea plane or light aircraft are a splendid way to view the islands, with flights taking off from Hamilton Island or Whitsunday Airport at Shute Harbour on the mainland. There’s a helicopter landing pad at Hardy Reef. Popular seaplane landing spots include Whitehaven Beach and Hayman Island.