The Whitsundays are sunny, steamy and spectacular, and about as close to paradise as it gets.

They’re the romance capital of Australia, hosting more than a thousand weddings each year, and setting the scene for at least a couple of proposals each week.

Rumour has it you can strike it rich in the reef around Haslewood Island, due to the number of gold engagement rings accidentally dropped into the sea.

And while many visit for romantic getaways, honeymoons and even babymoons, a few visitors fall in love with the islands themselves — so much so they never left.

John Henderson and his wife Jacqui arrived in Australia from New Zealand in 2001. When they discovered Airlie Beach, they knew they were home.

“It feels like we’re still on holiday,” John told news.com.au.

The Whitsundays are an idyllic chain of 74 islands off the coast of Queensland, and the gateway to the Great Barrier Reef.

The Hendersons started exploring as a husband and wife crew on charter boats, before John found a desk job for a marine retail company.

The 62-year-old skipper spent 12 months rebuilding a boat as a hobby, and when he was made redundant earlier this year, he bit the bullet and started his own business. 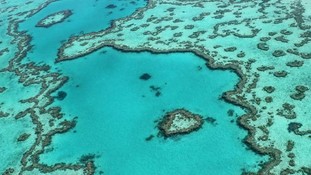 “I’m very proud of it, it’s a brand new craft now, and we picked the colours to match the water of the Whitsundays. It’s a very safe boat, I’d go anywhere in it,” he said.

It quickly becomes evident that John has one of the best jobs in the world. He can enjoy the glassy water of the bays, be the first person to leave footprints on a secluded beach, and rocket across the waves on his way home.

If you go to work every day in an office, or spend hours on trains or in traffic jams, it certainly makes you wonder if the grass is greener on the other side.

It’s also hard not to be jealous of Neill and Hayley Kennedy, who settled in the Whitsundays to start their sea kayaking business, Salty Dog.

“We were looking at a few options in northeast Queensland, and it made sense to be in the Whitsundays. We looked a Magnetic Island, Cairns, Port Douglas. I think the Whitsundays was right for us, in terms of kayaking, because of all the little islands. We wanted to do something we enjoy,” Hayley told news.com.au.

She’s originally from northern England, and when she came to visit it wasn’t long before she realised she wanted to stay. She met Neill at the Townsville outrigger canoe club in 1992, and the pair started their business in 1997.

“We just love it. We started off really small, we only had about four or five kayaks and we just built it up over the years. It’s a really interesting place to live and work.”

And while it’s hard yakka behind the scenes, especially when they’re organising six-day expeditions in winter, there are definite perks to this job. Within 15 minutes of paddling into Palm Bay, a green sea turtle popped its head up to say hello, and a wallaby stopped to stare as it hopped along the beach. Hayley said they often see clownfish as well, and humpback whales in the winter.

It’s like a dream, except, as their 17-year-old son Zane pointed out: “Tourism is great when tourists are coming.” He works casually with his parents as an assistant guide, but said he’ll study business at university before committing to the industry.

Just over 15,000 people live in the Whitsundays, and the region hosts about half a million visitors each year. Only eight of the islands have been approved for development, and the rest form a designated marine park.

Tourism is the driving force of the economy, but widespread coral bleaching has lead to concerns about the industry’s future, following a dip in numbers.

However, snorkelling in the reef off Haslewood Island reveals it’s very much alive. The colours and textures of the corals at Chalkies Beach are absolutely mesmerising.

While damage to the northernmost section is irreversible, scientists say lower parts of the reef — near Cairns, Townsville and the Whitsundays — are now recovering.

Of course, there are other drawcards to the region. The islands are incredibly picturesque, and it’s easy to see why Whitehaven is consistently named one of the country’s best beaches. Add an abundance of wildlife, and it’s heaven on earth. 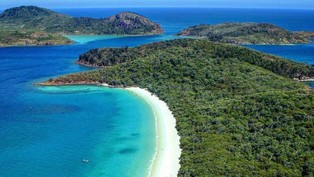 As far as John and Jacqui are concerned, the rose-tinted glasses haven’t faded.

They’ve been married 22 years, and renewed their vows at Airlie Beach last year.

“We had a nice romantic weekend, champagne at dawn on the veranda,” John said.

Jacqui is a talented artist, and when John’s out on the water, she’s often painting. The couple built a new house three years ago on two and a half acres of bush in the nearby hills, and John recently built her an art studio.

Their business, Whitsunday Paradise Explorer, has been operating since July.

“I’ve reached the stage in my life where I know how to work, and I have to work smarter. I need that job satisfaction. It’s not about the money, just to have an income, and the enjoyment and quality of life with it.”