This week I take a look at the outlook for rents in 2022, as well as where investors are buying now.

Get ready for sharp rises in rents in 2022

Australia ended 2021 with house prices up 21 per cent compared to the start of the year. While at this stage, it is looking like house price growth will continue, albeit at a slower pace, rental levels are set to accelerate.

Rental increases were far more subdued than price growth in 2021, increasing on average by 6.7 per cent. A great result for landlords, particularly given the more challenging conditions in 2020, but obviously far tougher for tenants.

The areas that have seen the most rental growth are linked to mining, particularly regional WA, Perth and Darwin. All these areas saw sharp declines in rents following the end of the mining boom in 2013 but since the start of the pandemic have shot up again, although are yet to return to their peak. Interestingly, despite the strongest rental growth in Australia, both Perth and Darwin have seen some of the slowest house price growth.

At a suburb level, the areas that saw the biggest jumps in rents generally fit into four categories: 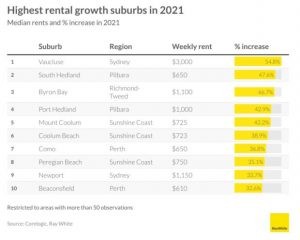 While most of Australia has seen big jumps in rents, it is not the case that everywhere has risen. Our CBDs continue to see high variability in rental conditions. Perth and Brisbane CBDs have both had decent increases in rents over the past 12 months while Melbourne and Sydney CBDs have seen declines. The condition of rental markets almost exactly match the severity of lockdowns in each capital city with Melbourne CBD unit rents dropping 20 per cent compared to an increase in Perth CBD of 12.5 per cent.

What is the outlook for rents in 2022? In 2021, closed international borders meant that rental increases were driven entirely by internal population movements, as well as wealth impacts. In 2022, we will see a third driver as international borders reopen. This year will be challenging for renters but good news for investors. It will however also kickstart a new construction cycle – expect to see more apartments to buy and rent in 2023.

Investor lending activity, according to the ABS,  jumped in November increasing by over 86 per cent over the year to hit an all time high. After being relatively quiet in the early stages of the pandemic, low interest rates, high savings rates and a return to price growth attracted them back into the market in 2022. Latest data from our team at Loan Market has shown where they are going.

Given 2020 was an unusual year, we have taken a look at where investors purchased properties in 2019 (pre-pandemic) and compared to 2021. Between 2019 and 2021, investor purchases by value in regional Australia increased by 227 per cent while the increase in capital cities increased by 167 per cent. The increases however were most extreme in Canberra and regional Tasmania, both areas that have also seen considerable price growth. At the other end of the scale, Melbourne has seen the smallest percentage increase, again consistent with price growth in this city.

In dollar terms, the story changes a bit. Sydney, which has seen the strongest price increases in Australia, has also seen the biggest increase in investor purchases, no doubt reflecting the much higher prices that have been paid in that city. Coming in second is regional Queensland and then Melbourne. 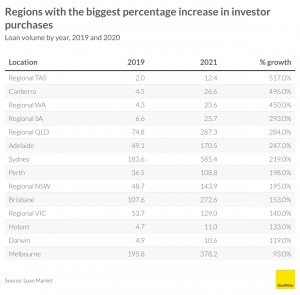