Welcome to my first weekly update for 2022! This week I will take a look at the regional areas that are more expensive than our capital cities, as well as how the pandemic has made Australian’s more wealthy.

These regional area are more expensive than our capital cities

Moving from a capital to a regional area is often seen as a good way to save money. In many parts of Australia however regional areas are quite a bit more expensive and the number of those that are more expensive than our capital cities has increased since the start of the pandemic.

In March 2020, there were ten regional areas that were more expensive than the capital city with the lowest median, Perth. Since then, median prices in five regional areas have overtaken not just Perth but also Darwin and Adelaide. These are Hunter Valley, Ballarat, Bendigo, Latrobe-Gippsland and South-East Tasmania.

The other big change has been that there are now three regional areas that are more expensive than Melbourne – Illawarra, Sunshine Coast and Richmond-Tweed. Prior to the pandemic, there were none. 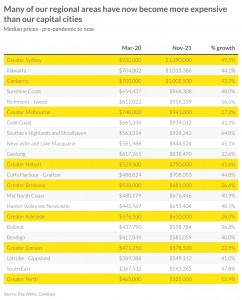 What is the outlook for regional property in Australia? Areas close to capital cities such as Geelong and Illawarra are likely to continue to see strong growth. Not only were these areas doing well prior to the pandemic, their pricing is now starting to more closely resemble nearby Melbourne (for Geelong) and Sydney (for Illawarra).

For those that own it, housing is making Australians very wealthy

The pandemic has driven household wealth to record highs in 2021, reaching almost $14 billion. The biggest component of the increase has been the growth in home values. Household wealth has increased by nearly $3,000 billion while the value of our homes increased by $1,900 billion since the start of the pandemic. The remaining $1,100 billion increase was mainly from increases to our superannuation (up $628 billion) and deposits (up $225 billion).

Over the long term, housing has become a major component of our wealth. In 1988, our homes made up just over a half of our total wealth. That has now increased to just over 63 per cent. 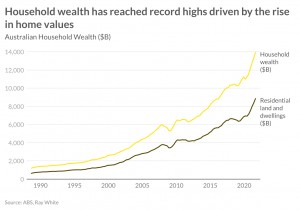 While the values of our homes have increased, it has of course been matched by higher levels of debt – total debt levels increased by $145 billion. Although it is only a small fraction of the increase in the total value of homes, it does raise the question as to how prepared mortgage holders are for a rate rise. At this point, it is difficult to tell as we don’t know exactly when a rate rise will happen nor the extent to which they will increase. With savings having increased, ideally most households will now have sufficient buffers to withstand higher mortgage repayments

For first home buyers, the sharp rise in pricing is particularly frustrating. If you are a first home buyer, the best advice is to just get into the market and try not to time cycles. Pretty much every suburb has risen in value over the past five years however fundamentally owning a property puts you in a very different position at retirement than a renter. The best piece of financial advice is to pay off your credit cards however coming in close would be to buy a home.