As we head to the end of the year, we take a deeper look into our auction data for the year to see which were the most competitive suburbs, and which suburbs achieved 100 per cent clearance rates.

This year’s most competitive suburbs 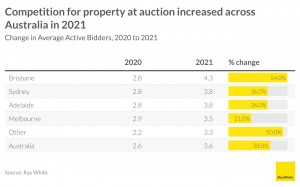 It was therefore no surprise that it was a Brisbane suburb that was the most competitive. Wishart in Brisbane’s south saw the highest number of average active bidders (9.4 per auction) in Australia in 2021. The suburb is popular generally because it is in the catchment of the Mansfield State High School but also because of close proximity to retail facilities and nice parks. In 2021, it also saw its median shoot up over 17 per cent, putting it on track to hit $1 million in coming months.

At a capital city level, the suburbs that saw the most competitive bidding were generally not the most expensive. This reflects that as you get closer to the median for that city, the more people that can afford to buy in that location. Rosebud West topped the list for Melbourne and is in fact one of the most affordable suburbs in the red hot Mornington Peninsula market. In Adelaide, it was the suburb of Greenacres which has a median of $555,500. The only exception to this was Sydney – Epping certainly isn’t one of the city’s most expensive but has a median price of $2 million. 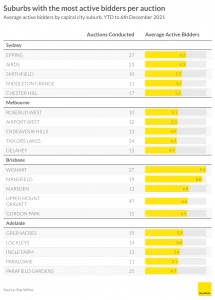 So far this year, we have conducted 15,568 auctions with a clearance rate of 76.8 per cent, the highest we have ever recorded. Of all the suburbs that we held more than ten auctions, 37 of them (out of 611 suburbs) achieved 100 per cent clearance rates. Of all of these, Cammeray on Sydney’s Lower North Shore had the most auctions taking place – every single of the 48 auctions that took place resulted in a sale. 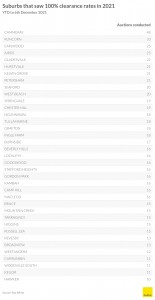