This week we take a look at Australia’s most expensive and cheapest streets, as well as the fastest growing state (and the states that contracted) during the pandemic

Where are Australia’s most expensive and cheapest streets?

The most expensive suburb in Australia is Point Piper, while the cheapest is the tiny town of Ivanhoe in western NSW. Looking at sales over the past three years, we can however see at a street level which are our cheapest and most expensive streets.

The top 10 most expensive streets are all in Sydney. Topping the list is Wolseley Road, Point Piper with a median price of $32.5 million and is not surprisingly home to some of Australia’s wealthiest people. If Wolseley Road is a bit out of your price range, you could perhaps try Bulkara Road, Bellevue Hill with a median of $15.3 million.

The cheapest streets are all regional and all located in isolated towns dependent on either agriculture or mining. Main Street in Mullewa in regional WA has a median of just $28,500, 0.1 per cent the price of Wolseley Road. The second cheapest is Railway Terrace in Minnipa on South Australia’s Eyre Peninsula. 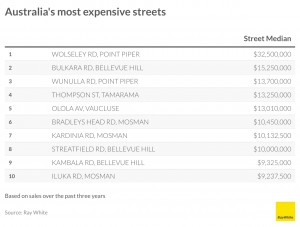 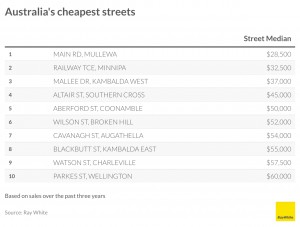 Which state is the fastest growing?

Economic growth by state was released last Friday. All states achieved positive growth in the 12 months to June 2021 with the exception of Victoria and the Northern Territory. The state seeing the most economic growth was South Australia. 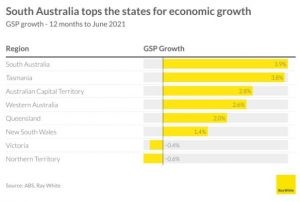 A key part of South Australia’s positive growth were strong agricultural conditions, particularly grain. This then flowed onto wholesale trade. Manufacturing was also particularly strong, although didn’t get to the levels seen in the state in the early 2000s.

Across the country, agriculture was a key strength to state based growth. Tasmania, coming in second for growth, also benefited from this. Managing the pandemic (public administration and health) was also a strong driver in many states. The ACT came in third with the growth of Government being the main driver. Mining was a growth factor, particularly in Queensland (gas) and Western Australia (iron ore)

Extended lockdowns were very bad news for Victoria’s economy and led to a contraction of the construction industry. More positively, very strong agricultural conditions, as well as public administration and health care, reflecting control of the pandemic. The Northern Territory’s fall was driven primarily by the drop in oil demand during the early stages of the pandemic.