This week I take a look at September’s strong inflation numbers and what it means to property, as well as the top suburbs for returning expats

Inflation jumps – what does it mean to property?

No surprises, inflation remained high in the September quarter, recording a three per cent rise year-on-year. The two categories that saw the biggest increases were new dwellings and automotive fuel. New dwellings were impacted by very high levels of building activity, driven by HomeBuilder, as well as supply chain disruptions and building material shortages. Supply chain disruptions also played a role in automotive fuel, as did high levels of demand and relatively low levels of supply.

Strong inflation following the end of lockdowns is not unexpected and is in fact occurring all around the world. The main question now is how quickly it comes back down. If it is transitory, it is less problematic. If it remains persistent, then it raises the chances of a sooner than expected interest rate rise. Worst case, we see both rising inflation and rising unemployment (stagflation), something that hasn’t occurred since the 1970s.

The other impact of high inflation on property is the impact on the building industry. Building costs are rising rapidly which is bad news for anyone wanting to renovate or build a home. Bigger projects also become more expensive and it may no longer be viable to start some developments. As we have seen already, new dwelling prices jumped significantly in the September quarter. This becomes problematic for affordability.

Will the RBA increase interest rates sooner than expected? At this stage, it is too early to tell given we don’t know how persistent high inflation will be. Unclogged supply chains would improve things dramatically, as would an agreement between oil producing countries to increase supply levels. If we continue to see inflation above three per cent into 2022, then an increase in rates will become more likely and with it, a slow down in house price growth.

As expats return, where could we expect a jump in high end rental pricing

Next Monday, international borders reopen which is great news for anyone who is looking to return home to Australia. Over the week, we have heard from a number of Ray White agents that they are starting to get a lot of rental enquiries from expats, keen to return in time for the 2022 school year. Most of them are looking for similar things – big properties in very nice/expensive family friendly suburbs. So, where are our top picks for expats wanting the best locations for their families?

To work out the best matches for expats, we had a look firstly at suburbs that attract a lot of families. Any suburb with less than 80 per cent family households were excluded. Secondly, we looked at only areas that have seen positive rental growth – negative rental growth would suggest that the suburbs aren’t all that appealing right now for renters. From here we ranked the top three most expensive suburbs to rent in each capital city with the above restrictions. After all, if you are returning home with all those UK pounds/US dollars/Singapore dollars/Hong Kong dollars, you can surely afford the very best.

Not surprisingly, the most expensive options are all Sydney based. Northern beaches suburbs of Seaforth and North Curl Curl make the list, as does the north shore suburb of Northbridge. Cheaper options are available in smaller cities, although Melbourne does provide some more affordable but very nice options for such a big city. Topping the list in Melbourne is Park Orchards. As you may recall from some previous Ray White research, Park Orchards also has the biggest homes in Australia. Not only would you get space for less than $1,000 a week but also access to some great schools.

What about if you are a returning expat without a family? If you are wanting a suburb that isn’t particularly attractive to families but is still very nice, Bondi Beach is your best bet. At $1,250 per week it isn’t cheap but with fewer than 50 per cent of households that are families, the nightlife may be a bit more fun. 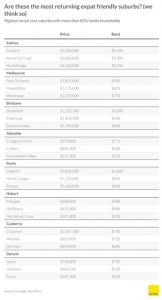