This week the RBA reiterated that at some point interest rates will increase, although this is still not imminent. Also this week, APRA’s chairman commented that it didn’t feel it had to throw the whole toolkit at restricting finance right away. So with rates still on hold and APRA treading carefully, it does look like we may be heading to a gentle slowdown in 2022, as opposed to a sharp deceleration.

With this in mind, this week, we are taking a more relaxed approach to property data and looking at lucky house numbers, and how the return of a tourist shop favourite could mean the return of one town’s price growth.

What is your lucky number?

Depending where you are, specific numbers are considered lucky, while others unlucky.  For many people, the number 13 is generally considered unlucky, while number 7 is lucky. In much of Asia, 7 is not seen as a great number while 8 is considered very lucky. Germans are keen on the number 4 while in China and Japan it is associated with death.

When choosing a house to buy, do certain house numbers achieve higher prices? Would you buy a house at number 13? Or would that put you off? If you are of German descent, would you naturally be drawn to a house at number 4? Do Chinese seek out homes at number 8, and shun a number 7.

While we did this analysis for fun, it did actually surprise us that number 13 has the lowest median house price at $606,000. The highest median house price was at number 19 – not an unlucky or lucky number in any country (that I could find) and therefore considered fairly neutral. Meanwhile the number 7, which is considered both lucky and unlucky, was somewhere in the middle. 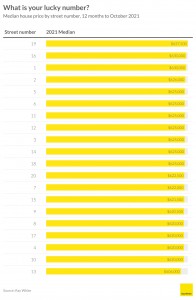 This is the only place in Australia which has seen no house price growth over the past 20 years. Could changing fashions lead to a comeback?

There is just one place in Australia that has seen no house price growth over the past 20 years and that is Coober Pedy. The median house price has actually declined from $45,000 in 2001 to $41,000 in 2021. The main reason that this decline has occurred is heavy reliance of the town on the mining of one particular gemstone and that is the opal.

Australia provides 95 per cent of the world’s opals and almost all of them come from Coober Pedy. Other than that, the town relies on a small amount of other forms of mining, as well as tourism. The biggest problem for Cooper Pedy is that opals have very little use besides being ornamental. And unfortunately the stone has been out of fashion for quite some time.

It is therefore perhaps good news for Cooper Pedy that in this month’s Australian Vogue magazine it was announced that opals are back in fashion, being used by global brands such as Gucci, Alexander McQueen and Fendi as well as Australian jewellery designers. If the prediction is correct it could mean greater demand for opals, a boost to the local economy and a turnaround in pricing for Cooper Pedy’s rather unusual dug out homes.

If you lack confidence in an opal gemstone comeback, investing in Coober Pedy without any capital growth may not be all bad. Corelogic estimate a rental yield of 21.7 percent which would more than make up for the decline in prices.