A NEW Whitsunday Regional Council has been sworn in and with it a new deputy mayor – Division 3’s Cr John Collins.

But one at the table, Cr Jan Clifford, appeared to be unhappy with the result.

With the official oaths of office done with, Mayor Andrew Willcox called for nominations for his deputy at the special meeting in Bowen this afternoon.

The resulting vote saw all but one in favour of Cr Collins, with Cr Clifford’s hand firmly staying on the wooden table.

Cr Willcox then asked for oppositions, with Cr Clifford’s hand still not budging.

The Division 1 councillor then spoke up, as the atmosphere – which was standing room only, with councillors’ families also attending the event – became tense.

“Did you call for any other nominations,” Cr Clifford enquired.

Mayor Willcox replied he had done as required.

“For clarification, as per the standard rules, that was what I had to do,” he said of his actions, receiving the okay from Acting CEO Barry Omundson.

A second vote was then taken, with all councillors – now with the seemingly reluctant raising of Cr Clifford’s hand as well – in favour of appointing Cr John Collins as deputy mayor.

Cr Willcox later said he was “very, very happy with our deputy mayor and also our first decision made as a council was unanimous”.

When quizzed about Cr Clifford’s enquiry during the meeting, Cr Willcox said he was stumped.

“I’m not quite sure what that was relating to,” he said. 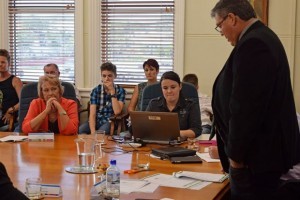