Solar Project Part Of $4m Funding Announcement For The Whitsundays

Acting Premier of Queensland Jackie Trad was the bearer of good news for the Whitsundays when she visited Up River this morning.

Across Whitsunday, Mackay and Isaac, councils will receive $16.68 million over two years; specifically the Whitsunday Regional Council will get $4.07 million in the second round of Works for Queensland.

Ms Trad toured the water treatment plant in Up River before announcing the expenditure.

Construction of the Whitsundays first large-scale solar project at the water treatment facility is already underway and is one of the local government projects financed by the State Government scheme.

Ms Trad said 12 jobs would be created by the project and council would have a third of their pumping costs supplemented by solar power. 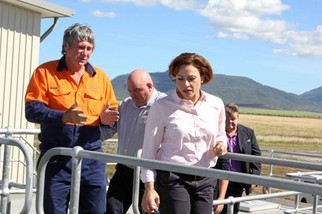 The plant sources subterranean water from the bed of the Proserpine river before it is pumped to Bowen.

Manager of assets and planning Yestin Hughes said the project was expected to be complete by the end of the year and save the Whitsunday Regional Council $15,000 a year in electricity costs.

The solar project is expected to result in a small rate reduction for the people of the Whitsudays.

It would also mean that during a severe weather event, Bowen would still receive water after the grid had shut down.

Cr Mike Brunker said the new solar project was designed to mitigate against water loss during a cyclone. 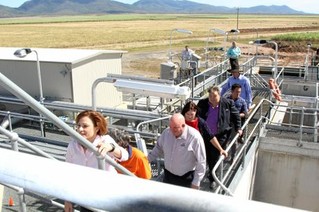 “This will give us the ability to keep ticking over, at a reduced rate, but certainly giving us some water up in the Bowen and Proserpine areas,” he said.

Ms Trad said the clean energy project would produce significant savings from the first year of operation and the benefits would be spread across the whole Whitsunday region.

“We know that these projects are having an enormously positive impact on the community and I’m excited to see this continue,” she said.

When it came to the issue of Shute Harbour Rd flooding at Hamilton Plains, Ms Trad said the minister for main roads needed to communicate with council and “come back to government with some advice on that”.

“Minister Mark Bailey in consultation with the council needs to look at some options,” she said.

Cr Mike Brunker said the stretch of road, which had already been inundated with water twice this year, was raised in a community cabinet session in September last year.