Ray White Chairman Lives Up To The Legacy Of Leadership

Brian White will never forget the moment. The year was 1972, he had just turned 31, and his legendary father Alan called him into Ray White’s Brisbane office for a meeting.

“He said he was remarrying after my mother died and wanted to do something else. The business by that stage was a great, strong business. And he said ‘It’s all yours now to run. Be a good leader,’ and walked out,” says the current chairman of the nation’s biggest residential real estate group. “I was terrified. I had no idea what being a leader was. I knew what being a manager was. But they aren’t the same thing.”

Ten years earlier Brian White had joined the business after completing an economics degree at the University of Queensland.

History now shows that he was up to his father’s challenge, taking the bold decision in the late 1980s to transform what was a strong provincial business into a national real estate group.

Under White, the firm’s commercial business in Brisbane was reconfigured to become the Queensland member of the Richard Ellis group and the family took the Richard Ellis brand to Sydney and New Zealand before his children eventually sold to CBRE.

Ray White now has over 1000 offices in Australia, New Zealand, Indonesia, India, Malaysia, Papua New Guinea, China, the Middle East and Atlanta in the US.

White says he has learned to be a leader and wishes his business card carried that title rather than “chairman”, because “that is my job”. One of his favourite pastimes over many decades has been to turn up at a Ray White office to meet the bosses and their staff. He has then often asked the former to “go for a drive”.

“And then I asked the staff ‘What is the most important thing to your boss?’. And when I told those managers later what the staff had actually said, some couldn’t believe it. Like some staff said: ‘He’s only interested in making money’. Others said: ‘He’d sell this place in a flash and be out of here if he got the right offer’. But it was the best thing I could have done for those managers,” White says.

“A few times I’d get phone calls the next day and the guy would say ‘I really don’t want to be here’. And I’d say to them: ‘That was the best thing you’ve ever done, because you are wasting your time here doing something you don’t want to do’.”

White says the most important trait for any leader is knowing what you want.

“I need to know what I want and then express it. I have never wavered in knowing what I wanted. It has not changed in all these years,” he says. The story of Ray White real estate began in 1902 with a tin shed in Crows Nest, Queensland. Brian, Alan, Paul and Dan White can be seen in front of the original office. 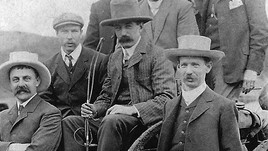 An early auction showing Alan, Paul and Brian White on the far right. 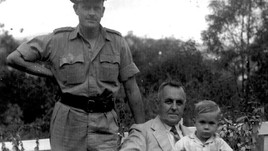 Ray’s grandson Brian White, now Joint Chairman and third generation leader of the Ray White Group can be seen sitting on Ray White’s knee as a child, with his father and Ray’s son Alan White standing. 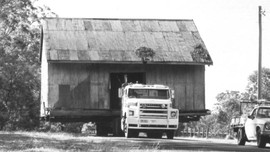 The original Ray White shed being moved prior to the centenary. Brian White’s son Dan, a director at Ray White, in front of the original office. Ray’s son Alan White remembers the shed as a place “always busy with people either wanting to buy, exchange or sell everything imaginable, including farm machinery, cars and livestock”. The family later moved to Brisbane to focus on real estate. 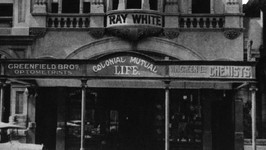 The Colonial Mutual building in Brisbane and original Ray White office in Brisbane. 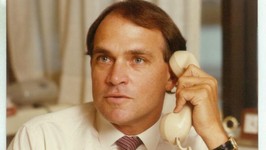 Alan’s sons Brian White, pictured, and Paul later joined their father to become the third White generation in the company. Together they made the controversial decision to expand beyond Queensland and introduce franchising.

An article in The Australian on Brian White from 1981. The company now has offices in New Zealand, Indonesia, India, Malaysia, Papua New Guinea, China, Middle East and Atlanta.

THEN: Brian White as a realtor in Thornbury, Melbourne.

Not that there haven’t been ­regrets or mistakes along the journey. During the Whitlam era of economic turmoil the firm was hit hard. At one stage White feared he could lose everything and used to walk Brisbane’s streets at 2am with his dog in tow.

“I came home once and said to (wife) Rosemary, ‘I’m sorry — we are out of money’. The banks were not lending. The only way you got a sale through was to get the vendor to leave the sale proceeds in the bank itself. I came home and told her we had to start growing our own food. We started growing pumpkins!” White says.

“But one of the things about real estate is people need to buy and sell. It is not an activity you can stop. Eventually it will happen. So things started turning. And nothing in the garden ever got harvested.”

Ray White Surfers Paradise principal Andrew Bell, who has known White for 30 years, says his chairman has never run away from a challenge. “And he has had his share of those. But he has always been a person who will take a challenge on. He is not impulsive but he is swift to make a decision. And he takes input from others. But he is very much his own man. I am not aware of any challenge he didn’t come through with a great result,” he says.

But in hindsight White wishes he had more confidence to move the business out of Brisbane earlier. By the early 1970s he realised interstate raiders such as feared Sydney business LJ Hooker were going to be a serious threat.

But it took him almost 15 years to act, when he eventually had no alternative.

In July 2009, Ray White sold most of its holding in the News Corporation-backed REA Group for $77.6 million after acquiring a 16 per cent stake from Macquarie Bank in 2002. Sam White left the REA board three years later.

But history now shows that REA shares are almost 10 times the price they were when the family exited.

In late 2010 Ray White was also forced to terminate its Randwick franchise in Sydney after a company behind it collapsed, owing hundreds of thousands of dollars to some staff.

Brian White dealt with the issue personally and eventually realised there had been what he said at the time was “a complete breach of faith” by key people.

White agrees he has seen behaviour in the industry that is unacceptable, but has no tolerance for it. “In one case that comes to mind I dismissed that person straight away,” he says.

He has always lived with people often questioning the reputation of real estate agents, but believes they are getting better.

“New technology is assisting at giving better service to the market. The industry attracts people with the gift of the gab and people that are confident to ask people to do things. But we sell over 50,000 homes a year and the number of serious complaints would be minimal,” he says.

“Our people know they are going to be measured. We have never had a scandal in our family, so have a standing. So those that sail close to the wind probably wouldn’t want to join us anyway. Of course there are other companies that also do it (ie, play it by the book) really well.”

He says Ray White’s agents need to be far better organised and give more value to clients prior to them making the decision to sell. “We are doing a lot of work with people downsizing, two years ahead of people selling to, say, go into a nursing home. There is a bigger challenge to have deeper skills to offer value prior to the actual sale happening,” he says.

Ray White chief financial officer Andrew Jamson, who has managed the finances of the company and the White Family office investment vehicle for three decades, says the firm achieved its best month of sales in November: $4.2 billion worth.

While he declines to comment on earnings (Ray White has a grandfathered exemption from filing accounts with ASIC), he says it is profitable with a “very strong balance sheet”. “They are proud of the business and proud of the growth but making a profit is not the key driver that gets Brian and the family out of bed in the morning,” he says.

“They are passionate about their businesses, their families, but they are not that passionate about being a passive investor in things. Family-owned and led is a key value here — that is a key difference between working for Ray White and others businesses that may have family ownership.”

Brian White learned a lot from his father and held him in high esteem, even if he did throw his son into the business at the deep end. Alan White passed away in 2007 after suffering a stroke which rendered him virtually unconscious for a time before he died. In the final days his son would visit him in hospital regularly.

“To have him recover from that would have been cruel. That was the end of his life,” White says.

He says his father “loved this company as much as I do” and maintained personal relationships with its members his whole life. “After he died we found a letter on his desk from Andrew Bell at Ray White Surfers. It was penned when Alan was 90 and he had gone down to see Andrew and the team for a few hours and spoken about his father. Andrew wrote in the letter how inspiring his visit had been for the staff. So even at 90, my father could stir up a letter like that. He was amazing,” White says.

“Someone said to my father in his twilight years, ‘You must be proud of Brian and where he has taken the company’,” White says with a smile. “Apparently he simply replied: ‘Yep, yep, Brian has done a good job … But it has taken him a long time!”