After a bumpy ride across the passage to Langford Island on Wednesday, a “record” windfall of $330million across three years has been announced for the Great barrier Reef.

Premier Annastacia Palaszczuk with Minister for the Great Barrier Reef Leeanne Enoch and Member for Mackay Julieanne Gilbert slipped off their shoes and got some island sand between their toes before taking questions from the press.

Timed to coincide with World Turtle Day, MsPalaszczuk said the investment would boost programs to “build, protect and restore the resilience” of the Great Barrier Reef.

“In the upcoming budget we will allocate $40million of new funding to significantly increase our state’s financial contribution to the protection of the reef,” she said. Member for Mackay Julieanne Gilbert with Premier Annastacia Palaszczuk and Minister for the Great Barrier Reef Leanne Enoch at Langford Island on Wednesday.

A further $13.8million across the next four years will be spent on the Joint Field Management Program on top of the $35million already invested in the program.

On forced compliance with agricultural best management practice programs such as BMP Smartcane, Ms Enoch was non-committal but did say “more needs to be done”.

“We are continuing those conversations to ensure we have good farming practices and that is what this funding will go towards assisting,” she said. 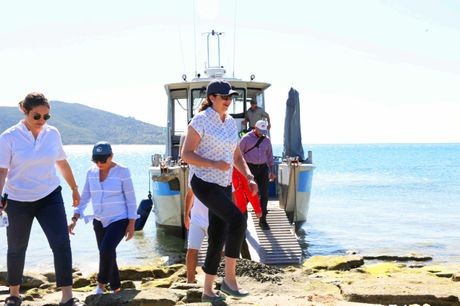 Premier Annastacia Palaszczuk arrives at Langford Island for the announcement of $330 million for the continued protection of the Great Barrier Reef.

While water quality was something that could be controlled, Ms Enoch identified climate change as the single biggest threat to the reef and took a shot at the Federal Government in regard to national climate change policy.

“We are doing what we can in Queensland, but federally we are yet to see any commitment around policy or direction with regard to climate change, which continues to be the single biggest threat to the Great Barrier Reef and to all coral reefs,” she said.

“We have to invest collaboratively to ensure we have great water quality and are reducing sediment run-off and that we have the staff and equipment to support the resilience of the reef, but we need the Federal Government to invest also in their commitment to reducing climate change.”