The youngest ever real estate agent has helped seal the deal on a Sunshine Coast property.

The property at 11 Mackenzie Drive, Maroochyodore was all set to be auctioned recently when Gabby Dobbin-Lavery , 8, stopped to enquire what Mr Goldsworthy was doing when he was knocking in the auction signs that morning.

“So it appears an eight year old has ended up selling our auction property for us,” Mr Goldsworthy said.

“Buyers genuinely do come from anywhere.

“Gabby was riding her bike around the estate with friends early Sunday morning when she saw my wife Emily and I putting up the auction signs. She asked ‘what are you doing? 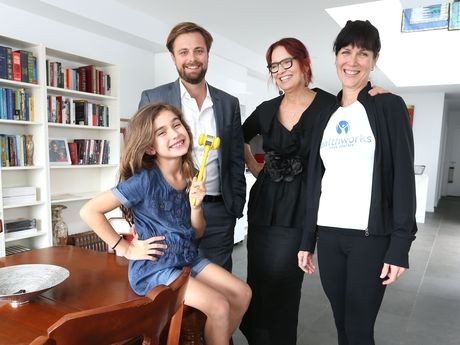 “We explained the house was for sale and going to auction later in the day and Gabby said her aunty really wanted to move up here from Brisbane.”

Mr Goldsworthy jokingly said to Gabby she would would be due for some commission if her Aunty bought the home.

“I was just joking and she rode off into the sunset and I wasn’t thinking anything of it. But she said she’d tell her aunty about it,” Mr Goldsworthy said.

“Anyway the auction was underway that afternoon and guess who turns up? It was Gabby and her Aunty Tracy.

“The property passed in and Aunty Tracy fell in love with the house and bought it soon after for $620,000.

“I checked with her mum Kelly and I gave Gabby some money, and some movie tickets and Ray White merchandise plus a copy of our Ray White Family values book.

“I reckon she’ll read it and grow up to be a real estate agent.

“Thanks Gabby for helping me sell the house.”