Abandoned pets have been given a new lease on life as Animal Rescue Whitsunday opens its doors this week.

The not-for-profit shelter was founded on the 105-hectare property of former biologist Christina della Valle, a Whitsunday resident of 28 years.

Ms Della Valle said she noticed a growing need for an animal rescue to take in dumped or unwanted pets of all shapes and sizes.

“I saw that there was a need and there’s nothing here. I have always looked on the animal rescue pages at Mackay and Bowen/Collinsville and they’re bursting at the seams,” she said.

“The problem of irresponsible people taking on pets and being overwhelmed with the responsibility and then just dumping them has been overwhelming.”

Ms della Valle was a biology teacher at a medical college in Switzerland before immigrating to Australia in 1989 with her late husband Peter Deicke.

Together, they had bred heritage pigs and beefalo on their Preston farm: Whitsunday Beefalo & Berkshire Gold. Ms della Valle said it had always been her dream to start an animal rescue, but it all happened back to front last week when the “bush telegraph” spread the word before she was ready.

Within a week she had a rooster, which has since been re-homed, seven Labrador Mastiff cross puppies and a cat called Betty who gave birth to five kittens. 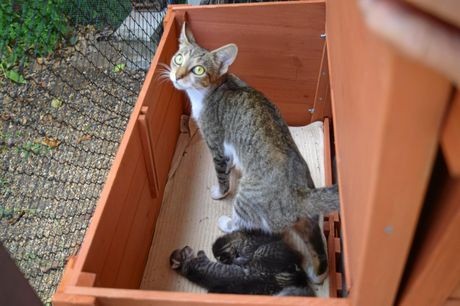 Betty the cat and her kittens.

Betty was found living in a drain on Marathon St, Proserpine, before being flushed out by rain from the monsoon between January and February.

“I went from a heritage pig breeder and special cattle breeder to animal rescuer, but I’ve always wanted to do something like that,” Ms della Valle said.

Ms Della Valle said she had to scramble to get everything set up, but the response had been “heart-warming”.

“The community has been absolutely amazing. I cried out for help to put a kennel and an animal shelter together and I had two couples and a single person comes and they worked all day to help,” she said.

“So many people offered to volunteer.

“It’s so heart-warming to see.”

The biggest challenge for Ms della Valle will be veterinary costs. She has offered adopting families the option to re-home dogs for $190 and cats for $100, desexed and vaccinated, with no administration costs.

“I’ll be out of pocket I know. I might as well spend the little money I have on something I have always wanted to do,” she said.

“I know I have to sometimes be pretty strict in order to keep going. Sometimes I will have to say no.”

Ms della Valle created an account under the name of Animal Rescue Whitsunday with Proserpine Vets so direct donations can be made for rescue animal treatment. There is still work to be done as the shelter needs animal beds, dog and cat food and animal enclosures in good condition.

But in time, her dream may grow even greater.

To adopt a pet, donate items or need to re-home a pet, you can contact Christina della Valle, Animal Rescue Whitsunday on 0403397808.