The message that the Whitsundays is ‘open for business’ has never been clearer, with the first cruise ship returning to the region today.

Pacific Dawn’s passengers, 2000 to be exact, arrived at Abell Point Marina this morning as the first cruise ship passengers to set foot on Whitsunday shores since Cyclone Debbie hit the area on March 28.

Their arrival is expected to pump around $250,000 into the local economy.

Not only that but P&O Cruises also announced they would be donating $10,000 to post cyclone recovery efforts.

Brisbane couple Kelly and Stephen Chard had been planning their cruise for six months and said despite feeling a bit sad about the sunken boats and stripped trees, they couldn’t wait to have lunch and check out Airlie Beach.

“It’s great to get off the boat and see some music and see that everyone wants to get back up and going again,” Kelly said. 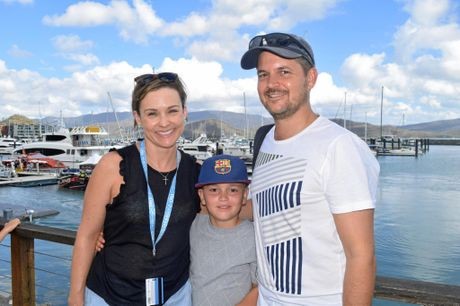 Brisbane family Kelly, Riley and Stephen Chard said they were looking forward to spending the day in the Whitsundays.

David Jones, from Carnival Australia, said as soon as they heard Airlie Beach was cleared to visit, they were on their way.

“Airlie Beach and the Whitsundays have pulled off a miracle to accept 2000 cruise ship visitors two weeks after a massive cyclone has gone through,” he said.

“We (already) have 48 scheduled post calls to Airlie Beach across our organisation next year. That’s roughly $250,000 into the local economy each visit and around $12 million for the year next year.

“This is like a 5-star cruise destination, you’ve got everything. That’s why so many of our cruise lines come here.” 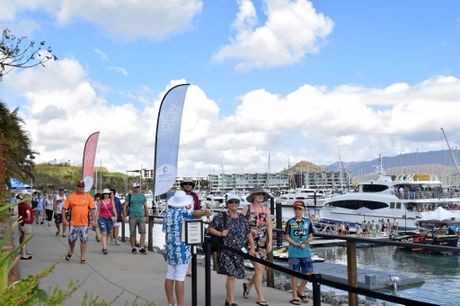 Tourism Whitsundays chairman Al Grundy said it was exciting times for the cruise ship market in the region and mentioned they were currently looking at additional cruise ship anchorages.

“The community spirit has been amazing. We’re back on our feet. Now we’re jogging and in a few weeks we’ll be running at full steam ahead,” he said. Tourism Whitsundays chief executive Craig Turner, said P&O and Carnival were the first companies on the phone to come back to the region.

“We gave some insurances we can deliver a Whitsundays experience (and) to have them turn up today is great. I’m hopeful (visitors) will leave today saying ‘we’ve had a fantastic time’ and I’m sure they will,” he said.

“The support and the efforts of everyone involved in this has been great. Everyone has come together as a team.

“For us now it’s about communicating we are open for business. There is still work ahead but where we are now compared to two weeks ago, we are very happy and every day is a better day.”