The public face of the iconic Whitsunday business, Fish D’Vine is entering semi-retirement with a bang after the hugely successful White on Whitehaven long lunch event on Saturday.

After 14 years at the helm, Kevin Collins said rather than being the end of an era, the move into semi-retirement was the beginning of something new for the co-owner of the successful Airlie Beach-based business.

“I am going to travel and fish a lot and do a lot of things we have been wanting to do but being in business doesn’t allow you to do,” he said.

“You give up a lot of time and Christmases and birthdays and Easters and its typical of tourism that all those times people are out enjoying themselves, someone is working.

“That is the business I have chosen and have worked in my whole life and I have loved every minute of it but there comes a time… I always said I was going to retire before I’m 60 and this is my last chance.”

Mr Collins founded Fish D’Vine with co-owner Rebecca Clark in 2004 and described the now thriving restaurant and catering business as a mum and dad-operated hole-in-the-wall style fish and chip shop. 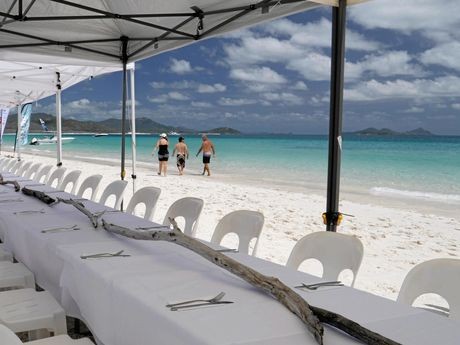 “It has been a wonderful ride and the answer to every question is ‘yes we can’.”

Employing 50 staff and feeding up to 350,000 people a year, Fish D’Vine has the catering contract on board all Cruise Whitsunday island transfers and provides food at more than 100 special events a year at Lure, Orlando’s, Paradise Cove, visiting super yachts and holiday houses on Hamilton Island.

From burger and beers at the Clipper Welcome Party on Friday night to an amazing five-star experience at the White On Whitehaven long lunch the next day, Fish D’Vine does it all.

“I think it has been that diversity of the business that everyone just loves, we just turn up and just do anything.

“I wish I was 20 years younger because the future is so exciting. Tourism is so exciting at the moment and the growth of the Chinese market is enormous for us.” 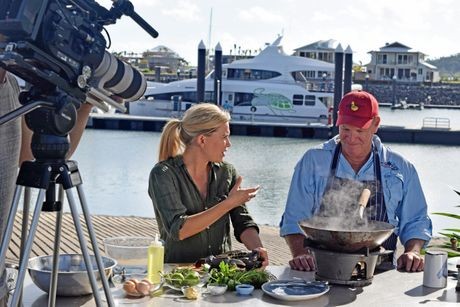 In the wake of Cyclone Debbie, the threat of further coral bleaching and with Daydream and Hayman Islands off line, does Mr Collins believe the tourism industry has great things in store for the Whitsundays?

“Absolutely, I think we are in fabulous shape particularly as world events have impacted on some of our competitor destinations,” he said.

“We in Australia and the Whitsundays in particular are looked on favourably for our security, our natural environment and out capacity to deliver. I have never been more optimistic in my life.

“I mean what we delivered on Whitehaven Beach on Saturday was just as good as it gets. There are photos of that event bouncing around the world and people are already asking how they get to be a part of this.

“That is the kind of thing the Whitsundays is capable of delivering.

“It was about everybody coming together and realising our business is to make people happy and we do it so well together. It’s a nice thing to make people smile. We have a little town mentality with a big town capacity and the ability to do amazing things.”

However, it has not always been a fair weather ride for Fish D’Vine.

In 2011 the restaurant nearly burnt down and more recently in March last year Fish D’Vine did not escape the wrath of Cyclone Debbie unscathed.

The very next day after Cyclone Debbie hit the town, up to 200 hungry people lined up to fill their stomachs with sausages, burgers, salad, fruit, muffins and ice-blocks from the popular restaurant. 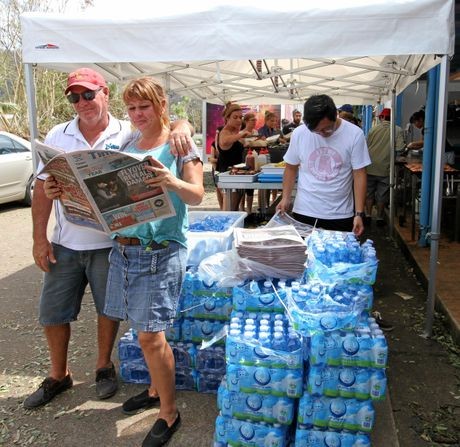 “It was our way of giving back. We donate to various charities and give out restaurant vouchers and we are a significant sponsor of the Whitsunday VMR and the Whitsunday Clipper Carnival and Ronald McDonald House,” Mr Collins said.

“We set up catering after Debbie because I have always been the boy scout. Ready for every cyclone and they are usually false alarms.”

However, Cyclone Debbie was not.

“We fed four and half thousand people over two days for nothing,” he said.

“But what ever doesn’t kill you makes you stronger and we have come out the other side of it and now we are one of those trusted and established Whitsunday businesses.”

It was with mixed emotions that Mr Collins steps away and he said he would always want to be involved in public events in the Whitsundays.