Jewel In The Crown Of Airlie Open

Zoe Herlihy was one of the lucky ones to get the jump on the crowds at the Airlie Beach lagoon yesterday.

She said swimming at the Cannonvale Swim Centre while the lagoon had been out of action was a poor substitute for a dip in Airlie’s heart.

“I am super excited,” she said.

When the lagoon officially opens at noon today, Zoe said she was going to jump in and swim and “never hop out”. Evie Herlihy, Tegan Hanks, Tiana Bell, Zoe Herlihy and Jacob Bell are the first kids to get wet in at the new lagoon.

Mayor Andrew Willcox said it was great to see the Airlie Beach lagoon would be open as promised today.

“Council and the contractors have pulled out all stops to have this amazing community asset open as quickly as possible,” he said.

“The lagoon has been repaired ad rejuvenated and is looking better than ever.

“While the lagoon is open to the public, there are still landscaping and shade sail projects under-way and we hope to finish these in the next few months,” he said.

When the revitalisation of the Airlie Beach lagoon is fully complete, the Whitsunday Regional Council will host a community event to officially celebrate the re-opening. 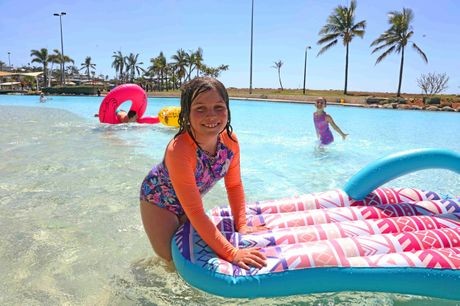 BACK OPEN: Zoe Herlihy gets wet at the revitalised lagoon.

Cr Willcox was at the lagoon yesterday with fellow councillors Jan Clifford and Ron Petterson, construction workers and members of the Whitsunday Coast Chamber of Commerce to make the opening announcement.

“The important focus for us was activating the lagoon area and main street precinct as quickly as possible,” he said.

Beach Book Boutique owner Belinda Harris said the opening of the lagoon would bring back people to the area.

“We are very excited about it,” she said.

“It will be nice to get Airlie back to looking normal again and generate some foot traffic.

“Hopefully opening will help the businesses and bring some life into the town.”