A Whitsunday sailor has proven the most enthusiastic entrant to this year’s Airlie Beach Race Week by flying his multihull across Pioneer Bay.

Suspended from a helicopter the 26-foot trimaran, called G’Nome, cut an unusual sight on the Airlie Beach horizon this morning and was dropped in the Whitsunday Sailing Club’s duck pond at about 9.30am.

Owner of the boat, Terry Archer, is determined to race at this year’s Festival of Sailing beginning on August 10.

But he needed to have his entry delivered by air as road permits were taking too long to finalise. 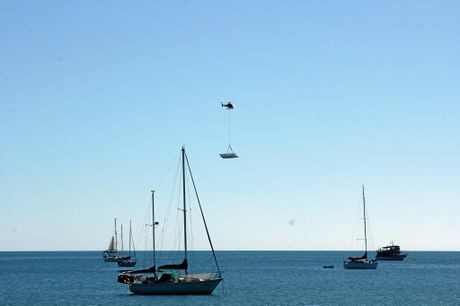 Suspended from a helicopter the 26-foot trimaran, called GNome, arced across Pioneer Bay on Tuesday morning.

“We had to have it (in the water) this week so we could get the rig on to it and hopefully we will be able to take it for a test sail this weekend,” he said.

Mr Archer has sailed in every Airlie Beach Race Week since 2002.

“And I wasn’t going to miss this one,” he said.

G’Nome is new acquisition for Mr Archer whose usual race entry was damaged by Cyclone Debbie.

“The boat was rotting in someone’s back yard. That is where G’Nome comes from, it was the garden gnome,” he said.

The 26 foot yacht G’Nome safe on the water in front of the Whitsunday sailing Club.

“We have dug it up and restructured it.”

Mr Archer said the mast and rigging was all ready to be fitted to the yacht, now floating off the Whitsunday Sailing club.

The lift from Botanica Dr estate all went smoothly apart from one of the hulls rising up onto the floating dock towards the end of the job.

“It wasn’t exactly on the program but it managed to survive,” Mr Archer said.

Owner of G’Nome Terry Archer celebrates the successful delivery of the yacht.

Mr Archer paid $2200 per hour for the helicopter, payable from when the aircraft left Mackay.

“To give you the maths it was probably going to be $2500 by the time we got all the permits to get it on a truck,” he said.