Daydream Island – known as a staple of Whitsunday tourism, where guests can immerse themselves in the living reef, pat kangaroos or look out onto the picturesque views only this section of the world can offer.

That was of course, before the island was devastated by Cyclone Debbie earlier this year; scars from which are still painfully visible today.

However, eight months on and construction to refurbish the resort officially began on Monday afternoon with hopes to re-open in August next year.

Daydream Island general manager Dawson Tang together with Whitsunday mayor Andrew Willcox cut the ceremonial ribbon to the applause of a small crowd gathered in the guttered atrium of the resort.

Mr Tang said updated figures have brought investment into Daydream and South Molle Islands renovations up to $86 million and once open Daydream will offer at least 270 jobs.

“Also on South Molle Island early stage work, demolition and renovation will provide another 50-80 job opportunity for the region as well for next year,” he said.

“As part of our main plan we are discussing to focus on more service to the local community.

“Once the hotel re-opens we hope to set up a package for the local people only, anyone who can show their identity that they live in the Whitsunday region you will get a special rate for accommodation and food and beverage price as well.”

Victorian company Amicus won the building contract and around 20 workman completed early stage demolition last week with another 50 to 80 workers anticipated to arrive by the end of the week.

Tourism Whitsunday CEO Craig Turner said the importance of CCIG’s investment into the region is not understated.

“The region is known for island’s and we only have a few operating at the moment which is a bit of an issue,” he said.

“This is a significant milestone and I wish them Godspeed.”

A sentiment which was also echoed by Mayor Andrew Willcox.

“I like many others have a special affinity with Daydream Island, I came over here over 20 years ago to get engaged,” he said.

“Council has worked to make sure the approvals came through as quickly as they possibly could and will continue working closely with Daydream Island to expedite the project.

“A few hundred jobs will bring prosperity as well as generate traffic through the region.”

The island renovation will see the inclusion of 270 plus rooms, at least five bars, retail facilities, an expansion of Living Reef and return of the Kids Club.

The day spa will also be relocated from the top of Mermaids to the main atrium, to be replaced by an Asian Fusion restaurant. 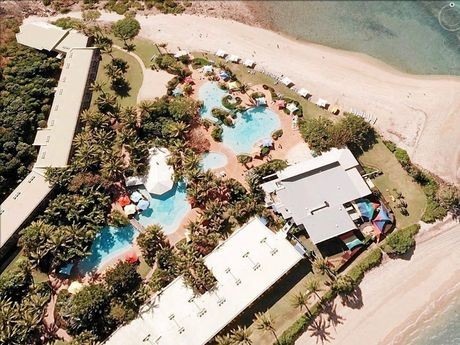