Cannonvale House Goes Up In Flames

Residents of Waite Creek Court in Cannonvale have rallied to aid of neighbours by fighting an out-of-control fire with garden hoses and dousing flames with buckets filled from a swimming pool.

At about 3.30pm the blaze started and emergency crews arrived on the scene at the last house in the cul-de-sac by 4.05pm according to residents.

Now the blaze has been extinguished but the house could not be saved.

A shocked inhabitant of the home were greeted by Whitsunday Police officers in the street and was visibly distraught.

Police remain at the scene taking statements as Queensland Fire and Emergency Service workers continue to hose the destroyed house.

Witnesses to the blaze who wished not to be named described the scene.

“I just saw smoke and heard a noise and that was before the gas bottles went up,” she said.

“My husband said ‘get out, get out quick’ because if the gas bottles goes we all may go, because we are two doors up.”

“You could hear the bamboo popping and I could see the smoke and I ran out into the back and the lady next door was on the phone (to emergency services) and I was too. I told them ‘there is a big fire quick, quick its in the carpark.

“But they seemed to take ages to come,” the resident said.

A spokesperson for QFES said the fire has just been extinguished and no one was at home at the time the fire broke out.

Two crews from Proserpine and Jubilee Pocket attended the blaze. 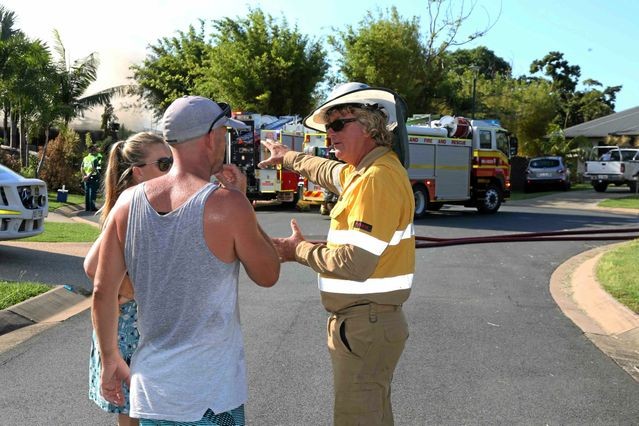