Airlie Should Be Proud Of Rebuild

Six months on from the scourge of Cyclone Debbie, the emotional scars are still the most telling legacy of the category four wrecking ball, said the Division 1 councillor for Whitsunday Region.

“I know people are hurting and I really understand that – we’re all suffering from post-traumatic stress, we really are,” Cr Clifford said.

She said the recent opening of the lagoon, Airlie’s heart and soul on the busy tourist strip, was a timely fillip.

It’s given all of the town a much-needed boost ahead of the busy holiday season.

“I think it’s mainly the (retail) shops that are still down a bit – rents on the Main Street are really quite high,” she said.

“But I think most of town will be back to as normal as it’s going to be by the Christmas holidays.”

Fish D’Vine owner Kevin Collins believed those businesses who could diversify were doing the best.

“I think that if all the restaurants, bars and accommodation reopened tomorrow, we probably wouldn’t have enough customers to go round,” said Mr Collins.

“Instead, those who are open in that space are having a great run, because there are 400 to 500 seats missing out of the mix.”

Mr Collins said the retail sector was the one finding it most difficult to adapt – “because those guys working on Hamilton Island might still go out for dinner but they’re not going to go out and buy a dress or a souvenir”.

Cr Clifford and Whitsunday MP Jason Costigan both said the insurance industry had to take the brunt of the blame for those businesses that were still shuttered or struggling to regain momentum.

Mark Bell, manager of the iconic Airlie Beach Hotel, which is still undergoing a major refit, said the worker accommodation shortfall was also a factor.

“People want to see things progress a lot quicker but if you haven’t got any more accommodation, you can’t bring any more workers to town to speed it up.” 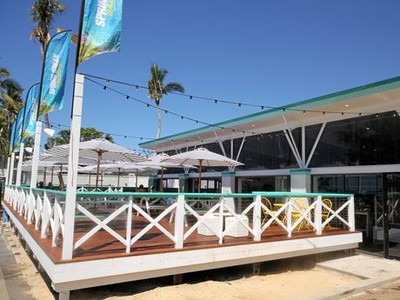 The Boat House has hit the ground running after a four- and-a-half month re-build.

Manager Ali Alty said the business, which was formerly named the Down Under Bar, was already attracting broad appeal after a long-needed facelift after Cyclone Debbie.

Featuring refurnished decks, a modernised bar and bathroom and cocktail menu, the Boat House has a touch of class.

Work On Pavillion Arcade Has Begun

WORK is under way at the Pavilion Arcade on Airlie Beach’s main st.

On Tuesday, a worker on site said repairs to the damaged roofs were complete and the process of gutting the water damaged businesses in the arcade had begun.

He said four of the 19 shops in the arcade were not trading and it was hoped the work would be completed by Christmas. 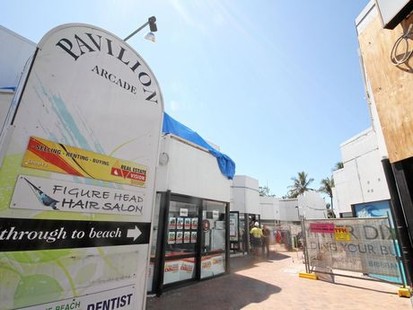