The father of a four-year-old who was savagely mauled at Conway Beach by a dingo-like dog is calling for better public protection, saying “maybe Lindy Chamberlain was telling the truth”.

Sandra-Lee Kelly tells about the attack at the end of Allens Rd. “The little boy was with his mother, the dog pounced and mauled (his) face and the mother kicked at the dog and it was very fortunate the dog ran away,” she said.

“This boy received large slices, gashes and puncture marks on his face and under his chin.”

Whitsunday Regional Council late yesterday confirmed the culprit for the weekend’s attack was a wild dog.

Council advised they would be increasing patrols, scenting the area and placing foothold traps.

The boy is now recovering at home in Proserpine after being airlifted to the Lady Cilento Children’s Hospital in Brisbane, and will be left with scarring on his face.

Christopher Hinschen lives on Conway Rd and his son was in the care of his mum, Mr Hinschen’s former partner, when the pair was confronted by the wild dog at the end of Allens Rd.

Mr Hinschen said the pair came to his house while waiting for the ambulance.

“It was a shock to the system,” he said.

“You don’t sleep and you don’t eat, it has been hard to deal with and it’s going to take a bit of time for him to get over it.” 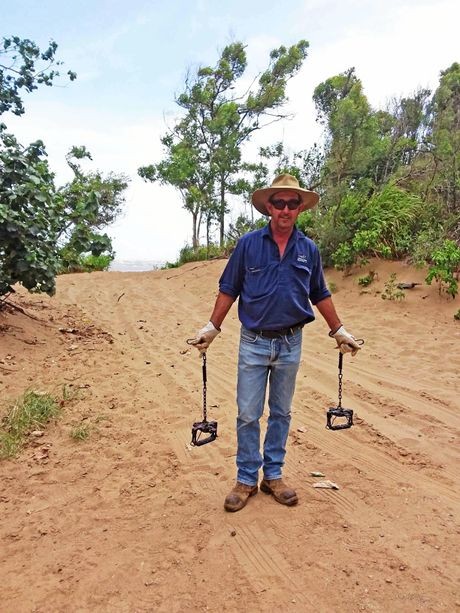 A Whitsunday Regional Council-employed trapper at the isolated section of Conway Beach near Allen Road.

The transport operator said his former partner described the dog responsible for the attack “(and) it sounds pretty much like a dingo to me”.

Whitsunday Regional Council officers said they had spoken with the mother of the injured child and “she gave a description of the offending animal which matches that of a wild dog, including a white tip on the tail”.

Council officers visited all homes in the area with dogs and none of the animals matched the latest description, “confirming that is was likely a wild dog”.

Mr Hinschen was aware council traps had been set in the area in an attempt to trap the dog but said more preventive measures were needed.

“Being a public place it should have sign posts making people aware of the dangers,” he said.

“It’s not only wild dogs in the area but you have got crocodiles as well and there is no signage for either.

“People need to be warned about the danger down there. There is a risk of wild dog attack. It is a concern.

Council said although no foothold traps would be placed in public areas, people taking their dogs to the Conway Beach area needed to ensure their dogs were on a lead at all times and also make sure their children are supervised.